On "Soundtracker Central" you may be able to find any Soundtracker available for any machine from the early 80's computers to modern ones. You will find legendary music trackers like Ultimate Soundtracker, Protracker, Noisetracker, Arkos tracker, Maxymiser, TCB tracker, Audiosculpture, Screamtracker, Fastracker 2, Impulse Tracker and many others. For sure you'll find the tracker you may need.

The name "Soundtracker" is a tribute to Karsten Obarski, who released the very first of a "digital" soundtracker under the name "Ultimate Soundtracker" for the Amiga in 1987. If you're interested in the story of "Ultimate soundtracker" you can read our in depth articles related to the history of music in the demoscene.

This site is definitly contributive and evolutive. I've tried to gather the most trackers i could find but if there's one that i missed or a specific one that have been udpdated or may need our attention, feel free to tell me. i'll update the informations here.

Tracker of the month 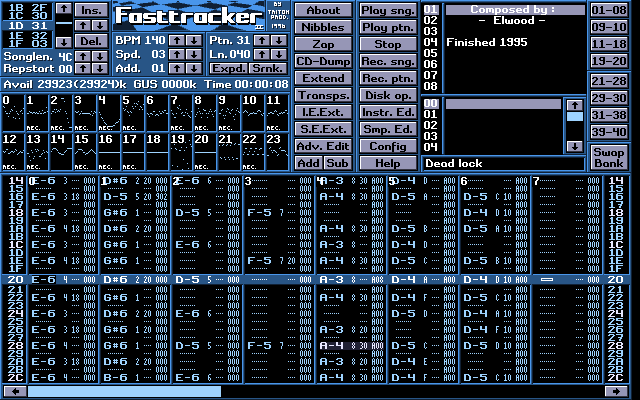 FastTracker 2 (also referred to as FastTracker II) is a music tracker created by Fredrik "Mr. H" Huss and Magnus "Vogue" Högdahl, two members of the demogroup Triton (who later founded Starbreeze Studios) which set about releasing their own tracker after breaking into the scene in 1992 and winning several demo competitions. The source code of FastTracker 2 is written in Pascal using Borland Pascal 7 and TASM. The program works natively under MS-DOS.