The 80's are definitly one of the most important periods in "computer music". This is also the moment the "demoscene" started. 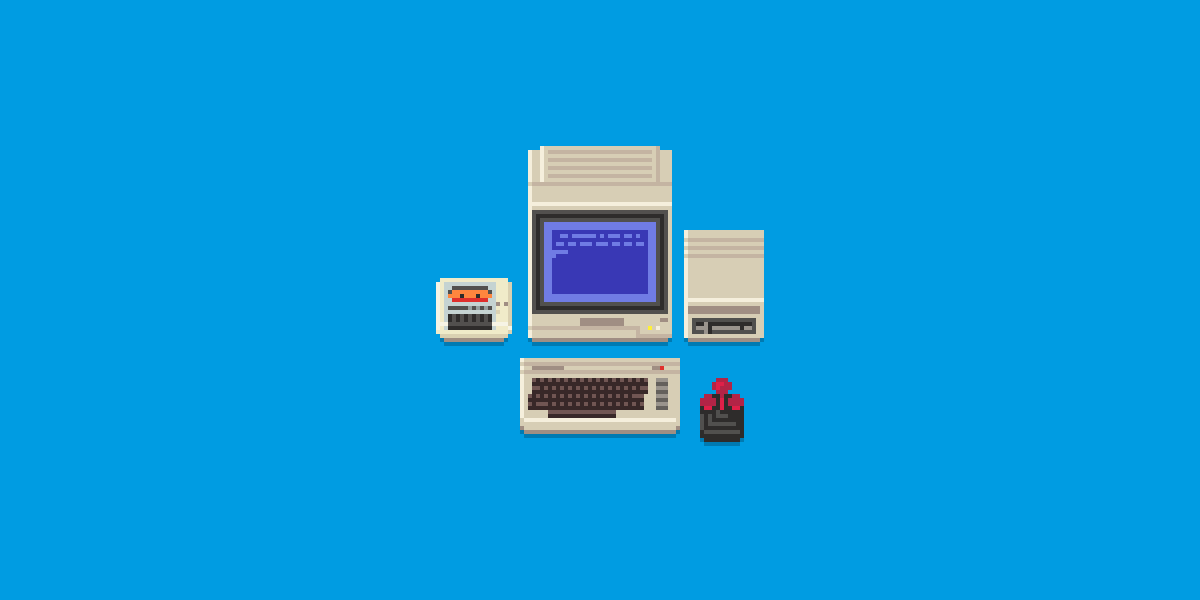 Back in the 80's some important machines are introduced to the market for the general public.

These “almost” affordable computers (thanks mom and dad 🙏) gave the very first opportunity for the creatives to compose digital music. And almost “out of the box”. Anyway with some help of additional softwares (freewares and commercial softwares).

The Atari ST was the only one to have a Midi Interface but it have not been used by the demoscene for some budget and transportability reasons. Anyway some famous musicians (Depeche mode, Jean michel Jarre, Vangelis, Kraftwerk...) took advantage of this by using softwares like Cubase or Notator

Even if each computer had a specific sound chip made by different manufacturers they were basically doing almost the same thing (except for the Amiga which had a more sophisticated chip).

For the Amiga and unlike the Commodore C64, it does not feature any "Chip-synth" like the SID nor the Atari ST AY, instead a more "modern"MOS8364. 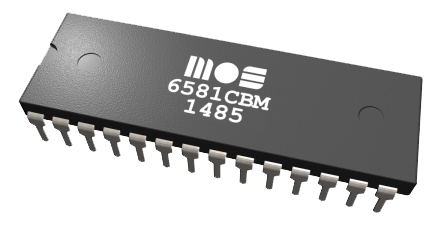 The most popular sound chip at that time was the Commodore 64 SID (Sound Interface Device) created by MOS (Metal Oxide Semiconductor). It was quite popular because it had some interesting capabilities which gave some new opportunities to the musicians.

For the story, The SID was created by Bob Yannes.

When Bob left MOS in 1982 he founded Ensoniq with Albert Charpentier. They both created the Ensoniq 5503 Digital Oscillator Chip which was used in both commercial synthesizers like the Mirage, ESQ-1, and SQ-80 and the Apple IIgs home computer.

The Ensoniq ESQ1 was a precursor in some areas. It was one of the very first synthesizers to use “wavetables”. Yeah, that thing which is heavily used in modern Virtual instruments. Basically "wavetables" is a method of synthesis where oscillators create sound “frame-by-frame” using wavetables. Wavetables are “complex” oscillator shapes; essentially pre-defined sets of tiny wave shapes that go far beyond traditional shapes like triangle and saw waves as the 80's soundchip are producing.

What chipsounds can do?

They are all generating basic waveforms. Sines, Squares, Triangles, Sawtooths and white noises to generate percussions. These are the most simple waveforms that can create any kind of sound.

Furthermore all these sound chips had a resolution of 8 bits.

What does “8 Bits” mean ? It's a question of sound quality. I won't go into details but keep in mind that an 8 bit sound only allows 256 different levels of amplitude, which is going to create some digitization errors and then low audible quality. 16 bit music will allow for 65,536 different levels of amplitude, so you get that much more nuances (or accuracy) in the waveform.

A sound is better than words. You'll hear the difference between 16 and 8 bits.

However, even if these sound chips were facing a lot of challenges (limitation to 3 sounds at the same time, 1 waveform per voice, heavy use of the main processor, complex musical creation process ...) these soundchips became instantly very popular.

Furthermore, on Commodore 64 some guys discovered that it was possible to dynamically reassign the voices to other waveforms on the fly which gave the illusion of having more than 3 tracks.

We can hear this in "Commando" by Rob Hubbard.

"Soundchip" music expanded very fast and got massively adopted thanks to some "trackers" which made music easier to compose, rather than having to "code" the music by hand.

Below some of the most famous chip trackers. I'll explain later in this article more deeply what a tracker is.

This period was incredibly prolific and many musicians emerged and became were very popular. Just to name a few. 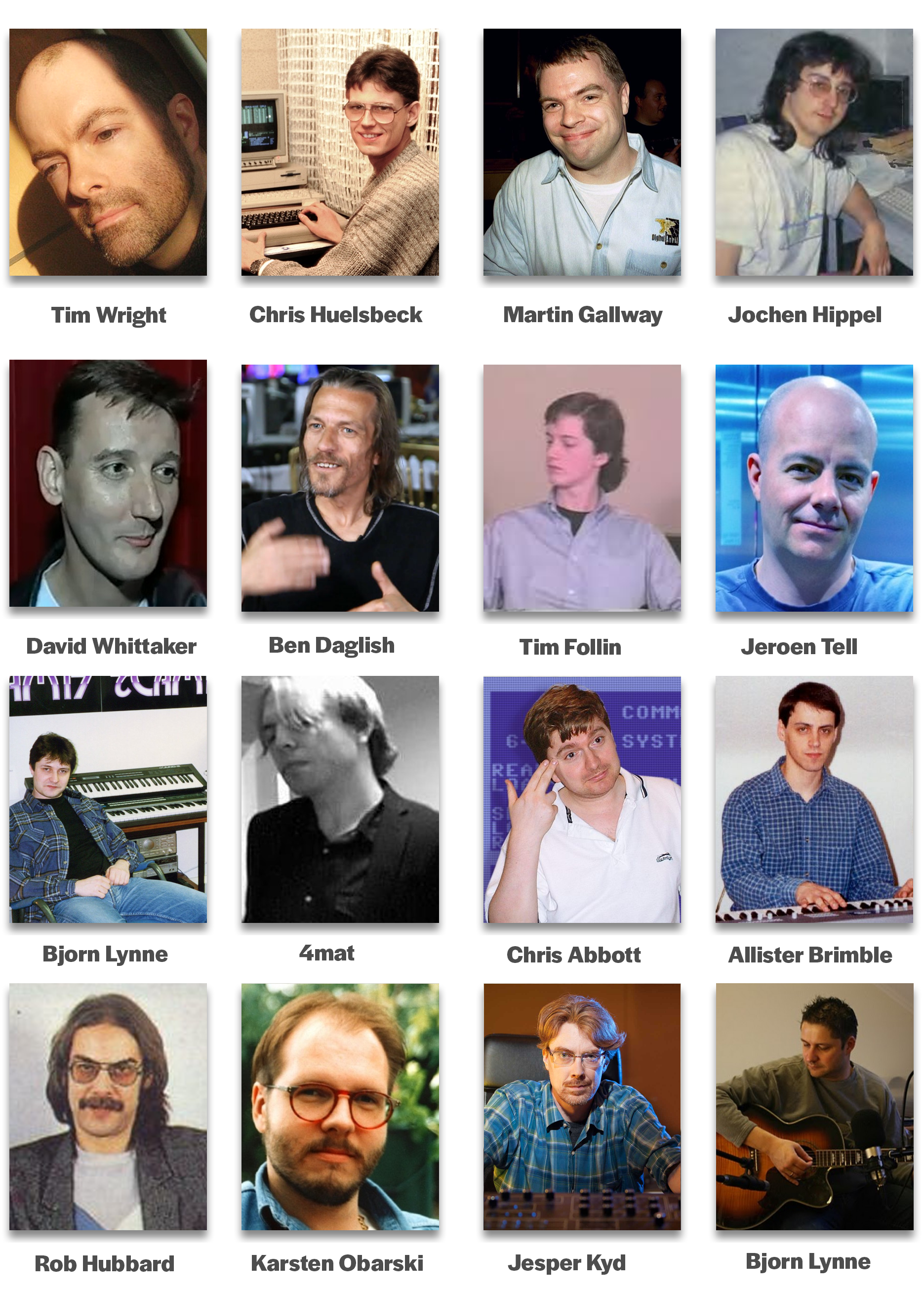 The music from these guys was massively used in a lot of games and demos at that time.

If you have 11 hours to spare you can check this great SID compilation in which you'll hear all the guys mentioned above.

Initially the definition of "chipmusic" was related to music composed on retro computers and of course by the limitations of the respective chipsets. But you can hear some "chip" sounds in contemporary music made by modern synthesizers. We then can distinguish 2 types of chip music. "Traditional chiptune" and "modern chip tune".

It is said that the earliest known example of chiptunes on home computer systems was made on the Atari 800XL using “Music Composer”. True or not?

Then, At that time Chip music is everywhere...

Anyway something new and revolutionary happened in 1987 from a German software developer that is going to revolutionize the demoscene music.