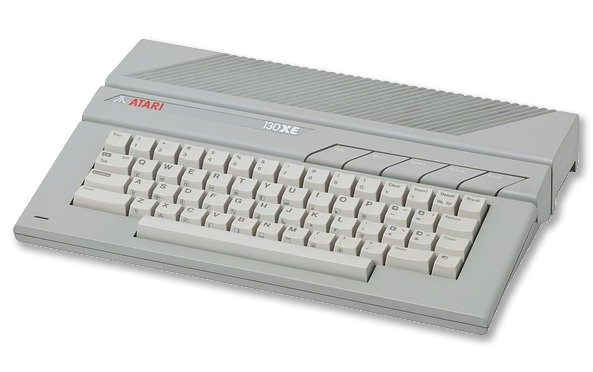 The Atari XE Video Game System (Atari XEGS) is an industrial redesign of the Atari 65XE home computer and the final model in the Atari 8-bit family. It was released by Atari Corporation in 1987 and marketed as a home video game console alongside the Nintendo Entertainment System, Sega's Master System, and Atari's own Atari 7800. The XEGS is compatible with existing Atari 8-bit family hardware and software. Without keyboard, the system operates as a stand-alone game console. With the keyboard, it boots identically to the Atari XE computers. Atari packaged the XEGS as a basic set consisting of only the console and joystick, and as a deluxe set consisting of the console, keyboard, CX40 joystick, and XG-1 light gun. (From Wikipedia)

The Atari 8-bit family is a series of 8-bit home computers introduced by Atari, Inc. in 1979 as the Atari 400 and Atari 800 and manufactured until 1992. All of the machines in the family are technically similar and differ primarily in packaging. They are based on the MOS Technology 6502 CPU running at 1.79 MHz, and were the first home computers designed with custom coprocessor chips. This architecture enabled graphics and sound more advanced than contemporary machines, and gaming was a major draw. First-person space combat simulator Star Raiders is considered the platform's killer app. The systems launched with plug-and-play peripherals using the Atari SIO serial bus, an early analog of USB. (From Wikipedia)