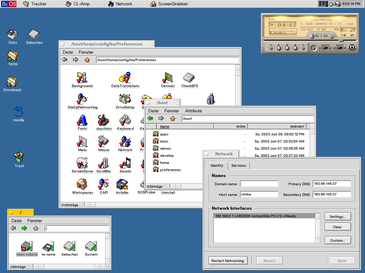 BeOS was an operating system for personal computers first developed by Be Inc. in 1990.[3] It was first written to run on BeBox hardware.

BeOS was positioned as a multimedia platform that could be used by a substantial population of desktop users and a competitor to Classic Mac OS and Microsoft Windows. It was ultimately unable to achieve a significant market share, and did not prove commercially viable for Be Inc. The company was acquired by Palm Inc. and today BeOS is mainly used and developed by a small population of enthusiasts.