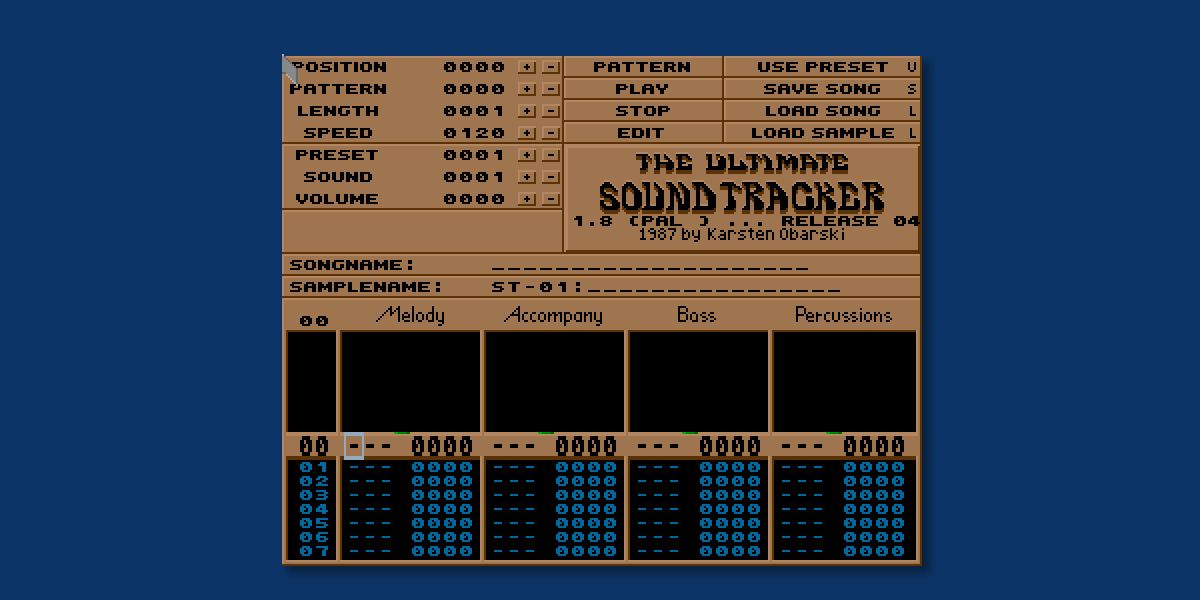 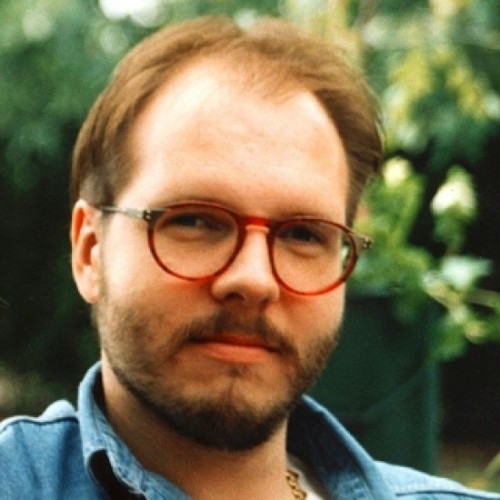 1987, Karsten Obarski, a Rainbow Arts studio employee wanted to go further in terms of audio quality and wanted to introduce something new in music composition.

At that time Karsten was fan of Martin Galway, Rob Hubbard and more particularly Chris Huelsbeck from whom he got inspired. 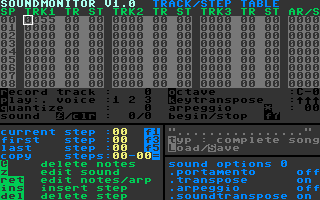 Soundmonitor have been given as a program to code by yourself in the german magazine "64'er".

Of course Soundmonitor was not really easy to use but you could make amazing things with it as there was already some interesting effects (filters, modulation, vibrato..).

There was also C-lab Scoretrack from Mark Jenkins which have been another source of inspiration.

This is how “Ultimate soundtracker” came about. 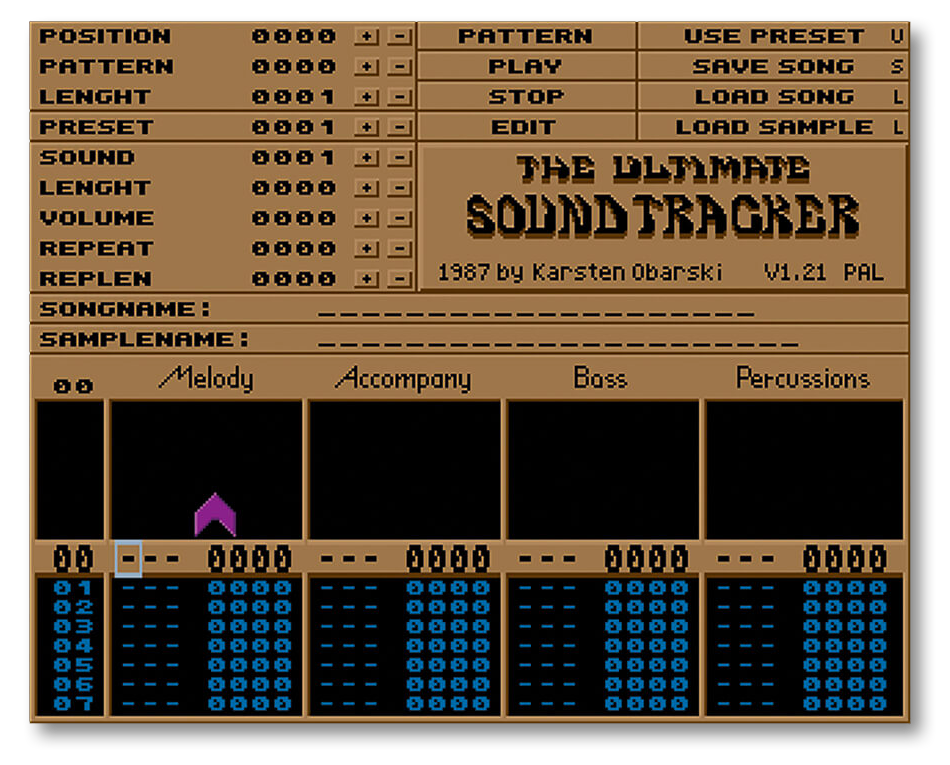 The concept of “Ultimate soundtracker” remains exactly the same as the previous trackers. The main difference is that instead of using generated chipsounds “ultimate Soundtracker” plays “samples”.

Even if the concept is clearly inspired from previous trackers and the concept was also found in the Fairlight CMI sampling workstation of the early 1980s.

The funny story is that “Ultimate soundtracker” commercially sold by “EAS Computer Technik” was considered illogical, complex, difficult. Eclipsed from the general public at that time by softwares like "Aegix Sonix", or "Construction deluxe music set".

Then, EAS Computer ended up distributing “Ultimate soundtracker” and it became free.

At no time the guys from EAS would have suspected that "ultimate soundtracker" would become one of the major musical creation software on personal computers. The thing is that Soundtracker does not require any "musical" knowledge as the notes are just in a grid.

To quickly explain what a tracker is, the principle is as follows: Play back "step by step" samples at different frequencies corresponding to the range of classical notes on 4 tracks.. For each step you can also define an effect and a parameter.

Samples on the Amiga are un-compressed. The format is IFF (Interchange File Format 8-bit Sample Voice, created by Electronic Arts) and max-size is 128ko

The notes are represented by some values that are scrolled up and down using American notation (A, C, D).

At that time, when it came to use samples, there was a small defect of playing the highest notes faster than the lower ones.

You then had 2 solutions. You load different sample for each end every note you want to use (takes a lot of space) or you use the "loop" effect at the end of the sample

One of the strong feature of Ultimate Soundtacker was the effects. Each sample would benefot from an effect (volume, vibrato, glissando..) which was no seen before

Yeah... Stretching the notes capability was not on the menu yet !

In the end, when you speed up or slow down the replay of this sample you can emulate notes. There is also this possibility to globally loop the sample or a dedicated part to create the “hold” effect.

From a technical point of view, “Ultimate Soundtracker was represented by 4 channels 8bits PCM (22khz) in stereo

There were 2 channels on the right, 2 on the left) and sample playback was handled by the DMA (Direct Memory Access) which saves the main processor. 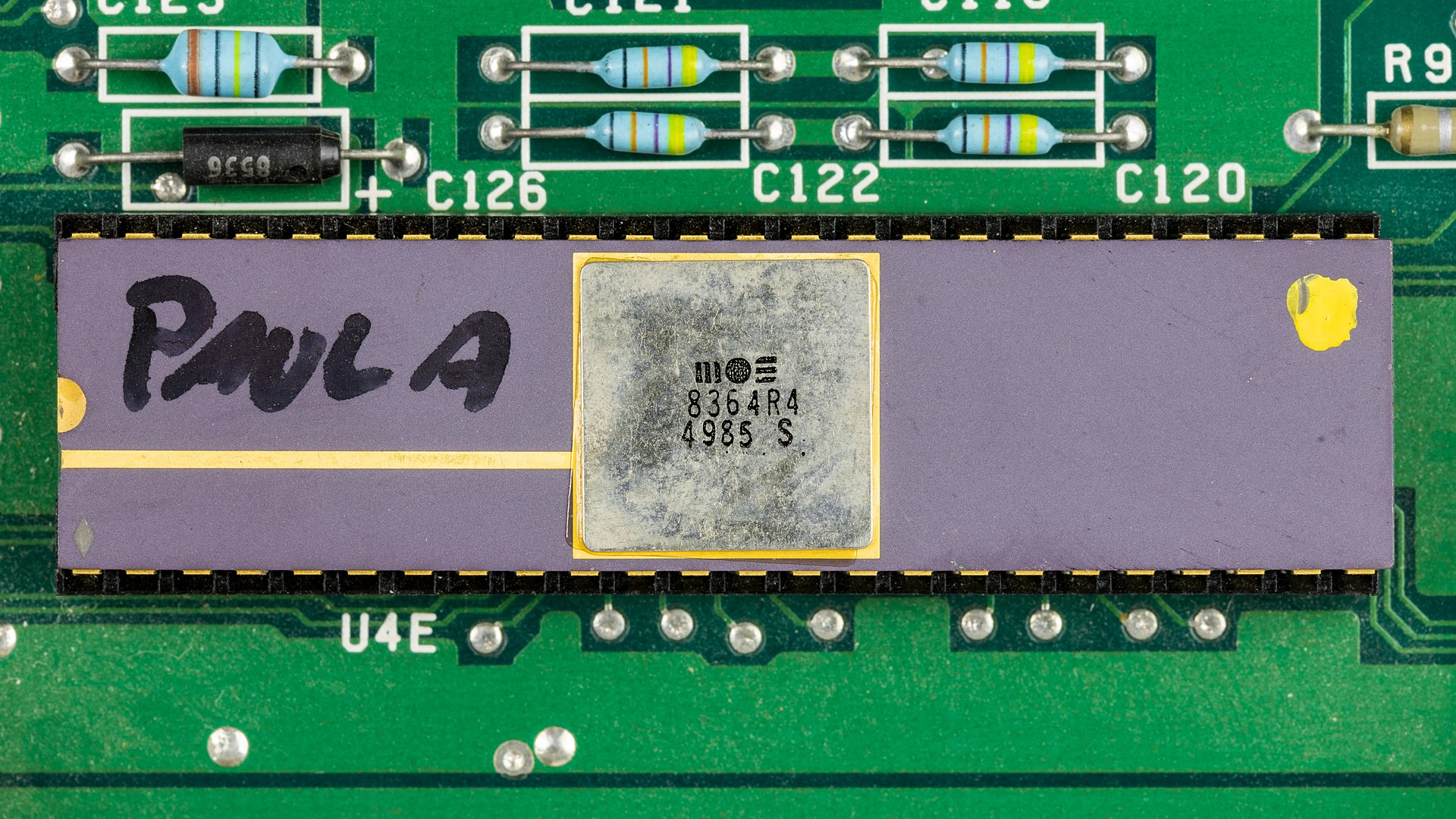 The chip of the amiga was named : Paula (designed by Glenn Keller, from MOS Technology). The features are the following

In the very first version these 4 channels were named « Melody," "Accompaniment," "Bass," and "Percussions,".

For those who don’t know what a sample is, this is a little piece of sound taken from a recording. It can come from a single instrument, a natural environment, a composition, etc.

All the samples will then be reused musically to make a new composition called a «module» which extension was .mod. This file contains both the samples and the score (the patterns). 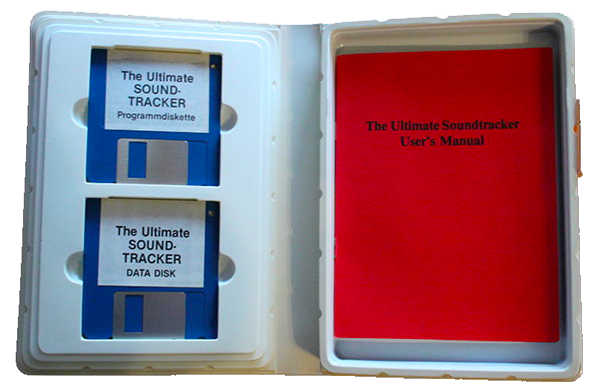 In its original version, “ultimate soundtracker” was distributed with a floppy full of samples named ‘ST-XX’. "ST" means "Soundtracker". This collection of sounds goes from bank #01 to hexa #B6 which means #116. This banks are still available today. You can download them here.

Most of the sounds were sampled from the Casio CZ101, Yamaha DX21 and the Roland D50. An incredible amount of music was created using these sound banks as they were in a good quality and not everyone had the possibility to sample their own synthetizers.

Anyway there were some limitations in “ultimate soundtracker”. 32 samples max, 64 steps per pattern, 64 unique patterns and limitation to 128 pattern sequence.

This concept is still used today in other software (Renoise, modplugtracker...).

Subsequently, the source code of “ultimate soundtracker” was disassembled in early 88 by the Exterminator (from the group : The Jungle Command) then modified and republished it as Soundtracker II.

Then, the group DOC (Docteur Mabuse Orgasm Crackings) released their own version of Soundtracker 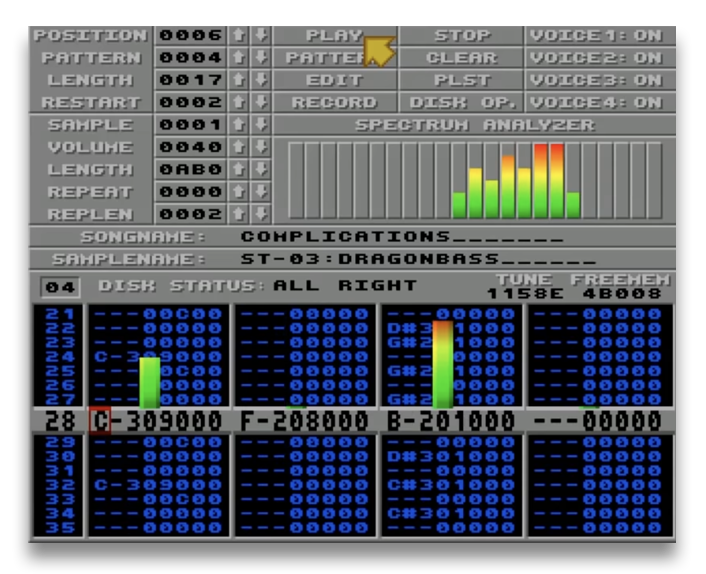 But the most important version came in august 1989. “Ultimate soundtracker” was improved by two Swedish programmers, Pex “Mahoney” Tufvesson and Anders “Kaktus” Berkeman, who released “Noisetracker”.

Unfortunately, Noisetracker, in some cases turned out to be incompatible with the new 2.0 version of the Amiga OS and was causing crashes.

In 1991 the Amiga Freelancers released “Protracker”, another successor of Ultimate Soundtracker which solved the stability problems and made several changes to the user interface and a sample editor.

Trackers on other computers

You can see here an extensive list of the Ultimate soundtracker

“Ultimate soundtracker” had so much success that it was declined on almost all personal computers.

Some other trackers not based on "soundtracker" code were quite successful like "Quartet" or "modplug tracker" (which is still updated today and that "Audiomonster" still uses. Hi Raphael 👋 ) 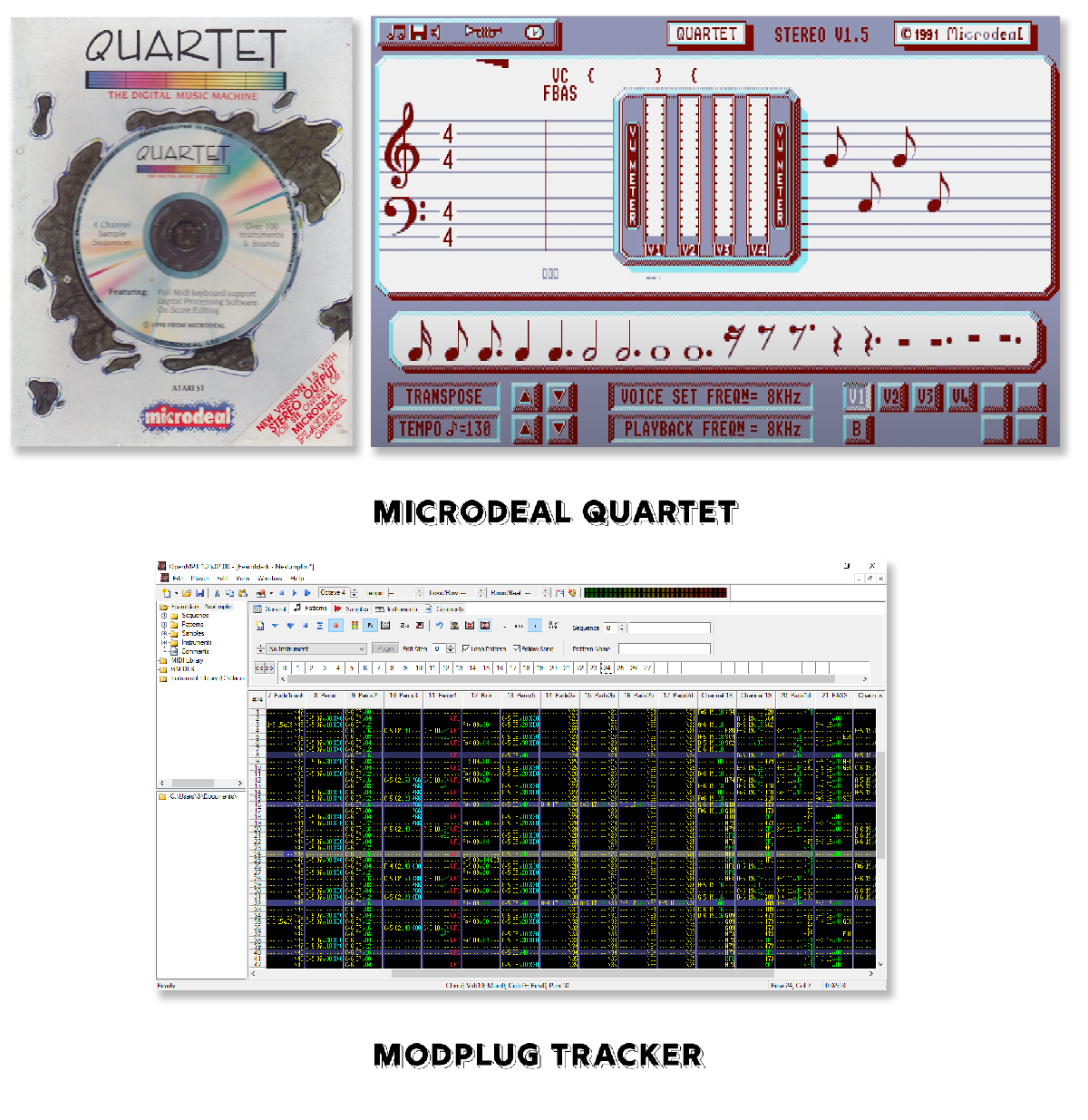 1987 is considered as an important date in the history of computer music as it was the very first time a module was used in an Amiga game : Amegas (a clone of Arkanoid written by Guido Bartels and published by reLINE Software)

And with no surprise… this music was created by ... Kasten Obarski.

Karsten have also been an active member of the demoscene

Karsten have disapeared from the radars and remains silent. Even if there's a big community of fan who are still looking for him.